Artist Benjamin Bridges takes a trip across London to visit some burgeoning creators. On the way he visits a bank, takes a trip to the sci-fi future, reads a map and finds out where paints are born.

There is so little time. There is so much I want to do each day. Recently I met up with four people involved in some interesting projects – artists and curators not satisfied with what they have already achieved, and not waiting around to be discovered. It’s hard not to look for some heroic or romantic pattern in their struggles.

First I headed North. I can’t think of a venue on the high street that makes me feel more uncomfortable and anxious than a bank. Even a lingerie shop or bookies would be preferable, and yet in a gutted former Santander in High Barnet, a quiet and contemplative space had been crafted.

Artist and curator Caroline Kha applied for the space from Moderna Art an organisation who currently offer more than thirty disused commercial spaces to artists. Originally she was granted the space for 6 weeks, which changed to 3 weeks, then 6, and back to 3. It was an uncertain and temporary venue but that transient feeling was welcomed. 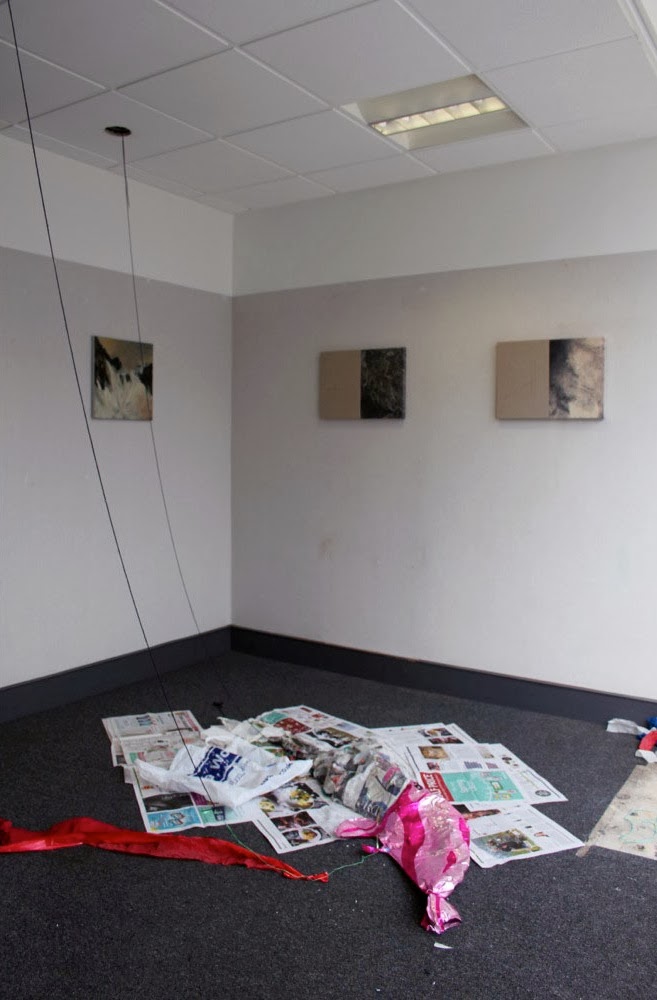 The former bank already had natural divisions within the space. There were waiting areas, offices and even an exposed the concrete floor indicating a torn out tellers desk. In this last space Caroline performed daily, staining the floor with a large water circle that faded throughout the day; a metaphor for the transient nature of the venue.

In the next room artist Andy Wicks had laid heavy blocks of purpose cut parquet atop a carpet, which left me with that somehow painful dilemma of whether to walk on it or not. Another space contained a private reading room with a transcribed painting of a Rembrandt hung on one wall and a guide to painting techniques sat on a small table in the far corner. 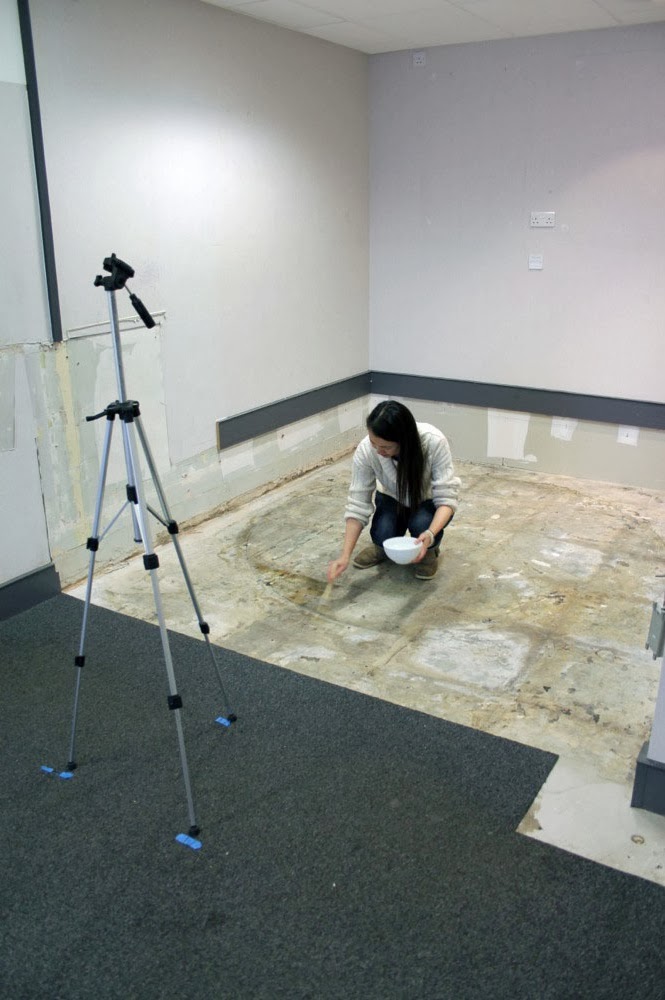 I think every artist would love a vast white cube as their personal project space, but this is unlikely to happen. Yet as Caroline has demonstrated, the history of an unconventional building can bring its own solutions and character.

However, even when a space is so carefully and sensitively used it is hard to persuade other artists and the general public to come along. This is in part due to awareness, but I also believe we subconsciously judge if a show is worth seeing based upon whether it is in an impressive venue, in the right part of town and maintains a certain respectability. And that is sad.

A project space is free of pretention, free of the market and free of the sterility so common in larger galleries. It's more akin to viewing an artist's studio, with works in progress and materials scattered around. You can see the living quality of the work before it is embalmed for the viewing public. Caroline achieved this freshness in High Barnet with works in progress, an open day rather than an exhibition and by creating an environment that is an honest reflection of the practice of making.

Next I journeyed South and East. I got to wear a pair of Google Glass. I was in the studio of painter Gretchen Andrus. To be honest I was not that impressed with the glasses but I was with the person wearing them. As artists go I have not met a more determined one and she is quickly becoming more successful than most of the schooled artists I know.

She studied information systems in Boston before moving to California to work for Google. She joked that in Silicon Valley Google is so 2008, but for me I was meeting someone who worked in the future, at the heart of sci-fi technology, with the hardware on her face to prove it. 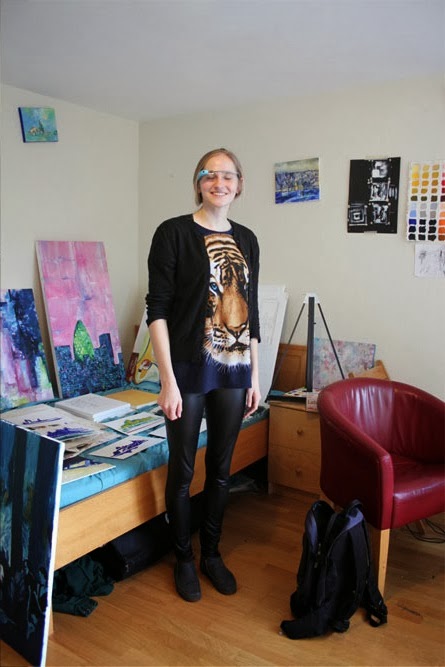 She has a couple of projects coming up and an impressive network of friends and contacts already. I guess that her degree in many ways prepared her for the art world better than many art degrees, a fact I find immensely frustrating. My professional practice module at school included a 2-hour session on how to make friends and not much else. It strikes me as vital for artists to be taught how to run and develop their careers and projects or we will end up with a market filled only by the lucky and generic few.

Further South to the river. Where do you go to find out which private views are on tonight? I thought that maybe galleries didn’t want to advertise them. Do galleries really want people to go to their openings? As soon as I wrote that down I realised it was a daft thing to think.

Of course galleries do and the next project I was shown is proof of that. I met with Jenny Judova near the Whitechapel Gallery and she told me more about her site Art Map London, which displays all the upcoming shows she can get information on.

It is a reasonable site but it currently lacks a little finesse. And it was for that reason that we met. She is putting together a Kickstarter campaign with a number of artists donating work to help generate funds for a much-needed project.  The plan is to build a custom website, with an app to follow where you will be able to see all the openings near you.

And this is great news for emerging artists and galleries. You can see more than just the places that have paid fees. You can see pop-ups, artist’s spaces and hopefully a range of new and innovative projects.

Finally, I headed West. Just beyond the Westfield shopping centre you can find Griffin Gallery, which runs exhibitions aimed at helping the careers of emerging artists. Above the gallery is the Daler Rowney Lab where paints are born.

Artist John Kelly won a residency there and is currently in situ developing a new body of work. Large canvasses are stapled to the wall. The paintings are built from layers of American football like logos, with wry puns stamped on top in block letters, interwoven with symbols of a culture observed from over the sea. 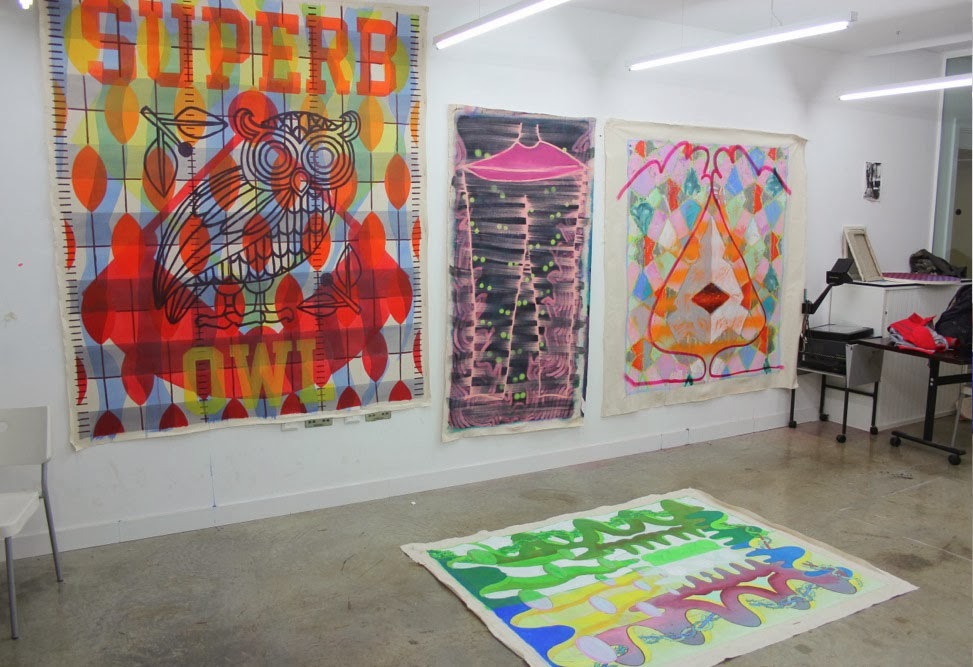 They are powerful pieces and a step forward from the gritty and visceral pieces I had seen him produce before. They feel like the space he is in, clean and ordered, light, balanced and purposeful. And I found myself wanting to just stand and absorb them, the references adding up and pointing towards some noble idea before they made fun of their own order. Previous work of his often felt a little contrived and overstated but John has fully pulled these paintings off.

A little walk and I was home.

There are few if any who get so lucky as to make a career in the arts without having to put in the legwork, but for those who are willing to try and find new projects to invest in, the possibilities seem genuinely endless. These four artists and curators exemplify this, by taking, making and developing opportunities. In my mind that is what the emerging art scene needs, and upon reflection, is what the best of it is made from.