A sceptical Joe Turnbull finds himself awe-inspired (and dare I say uplifted) by Nessie Stonebridge's aviary of extra-canvas paintings on display at Carslaw St Lukes.

I have to confess that my heart sank a little when I first entered Nessie Stonebridge's latest exhibition at Carslaw St Lukes. I was greeted by a diminutive canvas underscored by two shards of wood and a black ball; adding detritus to paintings in an attempt to supply a different dimension of texture and make the work stand out is quite a tired method, and one that is often done hamfistedly.

But as I ventured a little deeper, the scepticism subsided and within five minutes it had been unequivocally swept away, replaced with a mixture of shock and awe ­– however, Stonebridge's beautifully gestural strokes provide an eloquent counterpoint to such masculine, militaristic terminology. Her vibrant pieces seem to hum and bristle with energy, treading a tight-rope between abstract and figurative depictions of graceful birds that suggest a latent power in spite of their elegant appearance.

The show's subject matter can be read as a playful nod to the use of the word 'bird' – the term as it is often applied in a derogatory manner to women – as if reclaiming it. It's not just the organic sweeps that mark out a beak or a wing, Stonebridge manages to distil the very avian essence onto the page. They capture the intrinsic force of nature, hinting that it can be tapped into without ever fully unleashing it.

Stonebridge manages all this without falling into the clichéd nature/civilization dichotomy. Although her pieces do seem to exude a distinctly feminine aura, there is no idealised female form here, yes the paintings are elegant, but they are also at times dangerous or threatening and at others fragile or delicate.

This underlying tension is often acted out on the canvas; an evident outward manifestation of the internal identity struggle in pieces such as Not last night but the night before, 2 blackbirds came knocking at my door. Back to back they faced each other, drew their swords and shot each other. This, for me, is feminist art at its best. The semi-abstract nature of the work affords it a subtlety; the point is made, but never overstated.

As for the 'detritus' I mentioned earlier, it turns out to be a vital contribution to the paintings in the exhibition. Not only does it explode the energy of the canvases off the page and into the physical space of the gallery, it also adds symbolically to each piece.

Concertinaed canvas attached to pieces such as Forsters Tern evokes both the Japanese war fan employed by samurai warriors and the dainty, ornately decorated hand fans used by geishas. This conjures a powerful mental conflux of sexuality and violence without pandering to crass images. In Outside In My Comfort Zone the wing-like spread of canvas is clipped to a wooden splint, perhaps a method of mending a broken wing, or instead of restricting a healthy one? On the canvas itself, it certainly looks like the avian figure is struggling against something.

Stonebridge's palette is a sumptuous mix of dreamy greens and blues occasionally shot with furious electric pinks and yellows, which imbue the more placid colours with vibrancy. The sweeping freeness of brush and hand strokes is offset by some scratchy palette knife markings. The exhibition is both technically brilliant and highly evocative. Pity anyone who tries to clip this bird's wings. 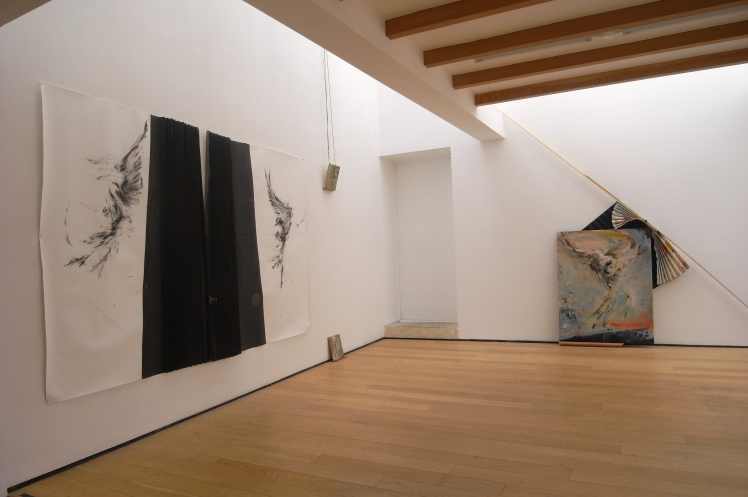