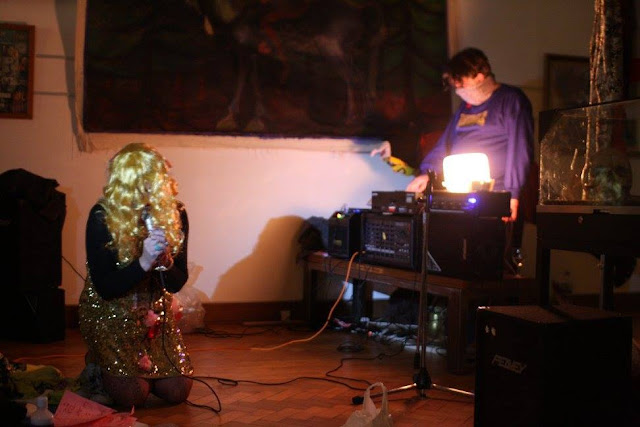 Last night something extraordinary happened to my soul, it was awakened and moved in a way that so seldom happens at performance art events. As part of Blake’s Outsiders, Damian and Delaine Le Bas along with the band Noiseferatu enacted a visceral slice of agitprop performance titled Jerusalem? The Ancient Days? Albion? which seemed to stop the clocks. Existing outside and of its time, expressing all the howling, hidden discontent felt towards the Sick Rose at the heart of Angerland.

Anticipation and edginess abound, Damian’s face is covered in cowboy-rustler-bad boy style with a scarf, Delaine in demonic Goldilocks fashion wearing a glittering gold shift dress  (‘all the better to see her with’ when the lights go out) is almost unrecognisable in long curly blonde wig and veil curtaining her face. She does not speak to anyone, she is attending to various props on the floor, she is becoming her persona. 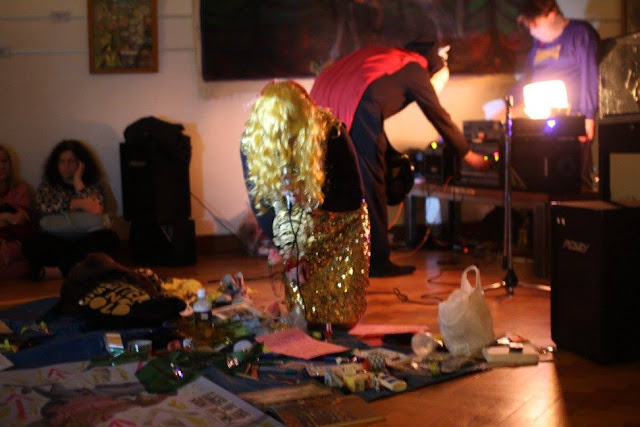 The lights go out, the music begins, a moody symphonic electronica, reminiscent of Bowie’s Low mixed with bird twitterings. Two musicians, enter from a room in the back, their faces covered by devil masks, contemporary signifiers of anti-capitalist political protests. Their guitars slung low over their shoulders like rifles, these sinister carabinieri move slowly among the crowd their bass lines mimicking the sound of ominous warning bells.

Delaine crouches down and begins to intone Blake’s verses about This Green and Pleasant Land, the words are wrung out and repeated in a measured gutteral wail. And all the while her dress sparkles as if aflame in the darkness. As the lights go up and the musicians leave, Damian remains at the mixing desk and now the birdsong becomes increasing more evident, a pastoral counterpoint to the previous existential darkness of events.

“The mitre become black, the crown vanish, and the sceptre and ivory staff/ Of the ruler wither among bones of death; they shall consume from the thirstly field,/ And the sound of the bell, and the voice of the sabbath, and singing of the holy choir,/ Is turn’d into songs of the harlot in day, and cries of virgin in night.” [i]

I am transfixed by the sights and sounds before me, this is no bourgeois self regarding art making, this is a Blakeian call to arms, a performance that has found its time, a howl that brings to mind all the avant-garde enactments that have gone before it from Jack to Patti Smith, from Weimar political cabaret, to punk polemic. 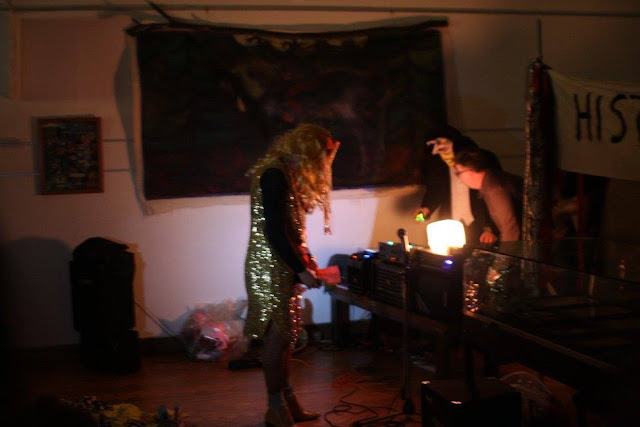 Referring to Blake during the period he wrote The Book of Los (1795) Dr Bruce Woodcock writes “The amazing productiveness of Blake during the first half of this decade was almost a race against time as governmental restrictions began to impact on the creative artists sympathetic to radical views”[ii]. Last night that race was once again being run.