Elvis at the O2

From Memphis to Greenwich. 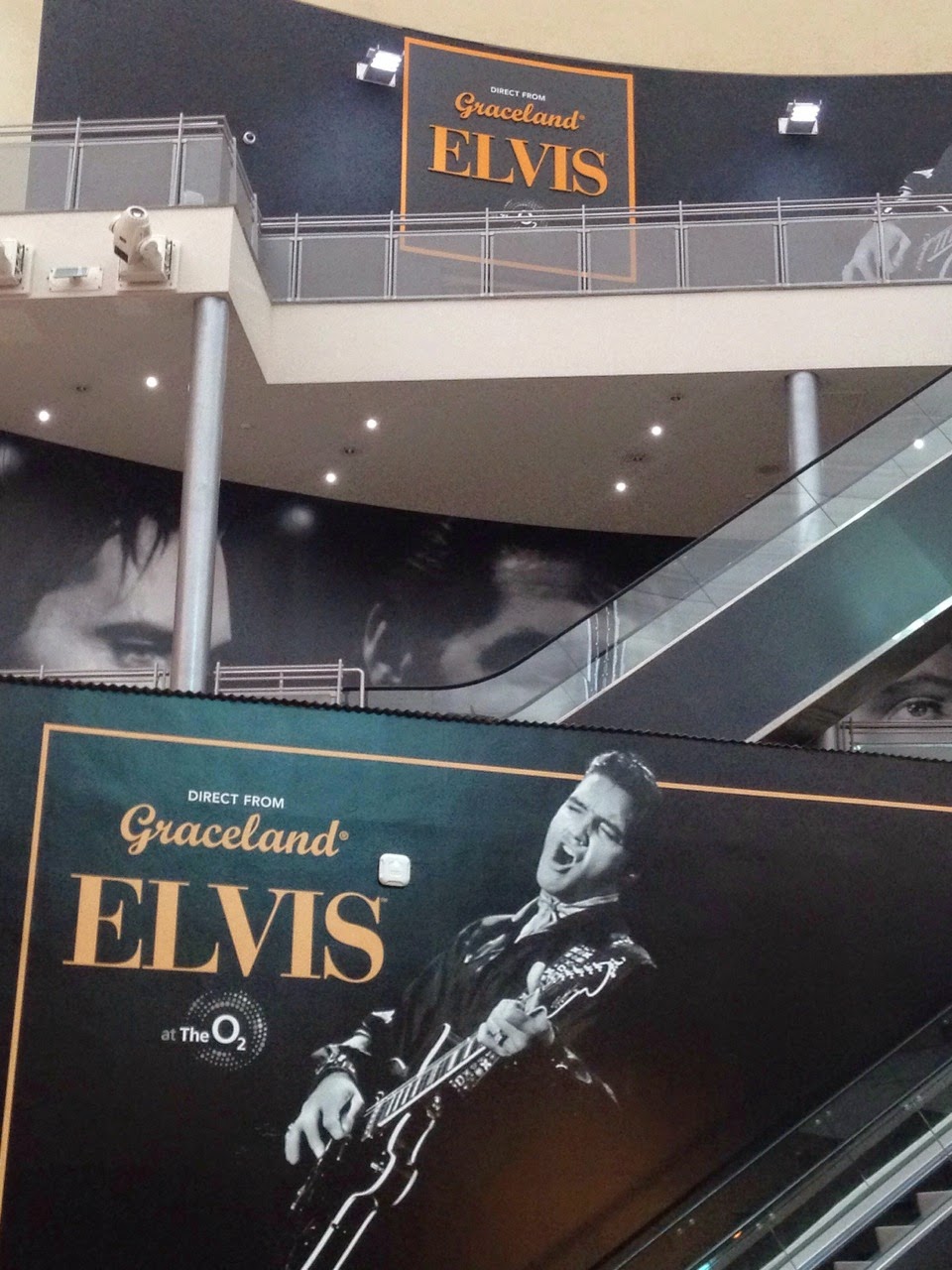 This exhibition of Elvis memorabilia from the Presley family’s Graceland archive is the biggest ever staged in Europe with many of the objects leaving Graceland for the very first time. There is however one very big problem, the O2 is not in Memphis, Tennessee.

Visiting Graceland, the home that Elvis very proudly bought in 1957, is an awe-inspiring experience for any Elvis fan. The house is as it was the day Elvis died in 1978, giving it a uniquely melancholic aura. Its location on the edge of the once prosperous, hard-edged, city of Memphis with its musical history of blues, rock’n’roll and soul infuses the experience with authenticity. The O2 on the other hand is a corporate hulk of a place in southeast London, housing soulless restaurant chains and reunions of past-their-sell-by-date bands. You might think that the ‘give us your money’ aesthetic of the O2 is completely in line with the money making machine that is Elvis Presley Enterprises. Elvis is worth much more dead than he ever was alive and Graceland itself is actually encased in a shopping mall that sells every conceivable shape of Elvis merchandise. But there is a difference. The idea of ‘Elvis’ and his huge appeal to young people was fundamental to the mass commercialisation of pop in the 1950s – the story of Elvis is the story of exploitation. Elvis’s manager, Colonel Tom Parker, spotted the financial rewards of merchandise very early on and issued a multitude of licences to allow the use of the Presley name and image. Some of these charm bracelets, lipsticks and bubble gum cards can be seen inside a glass case at the O2. 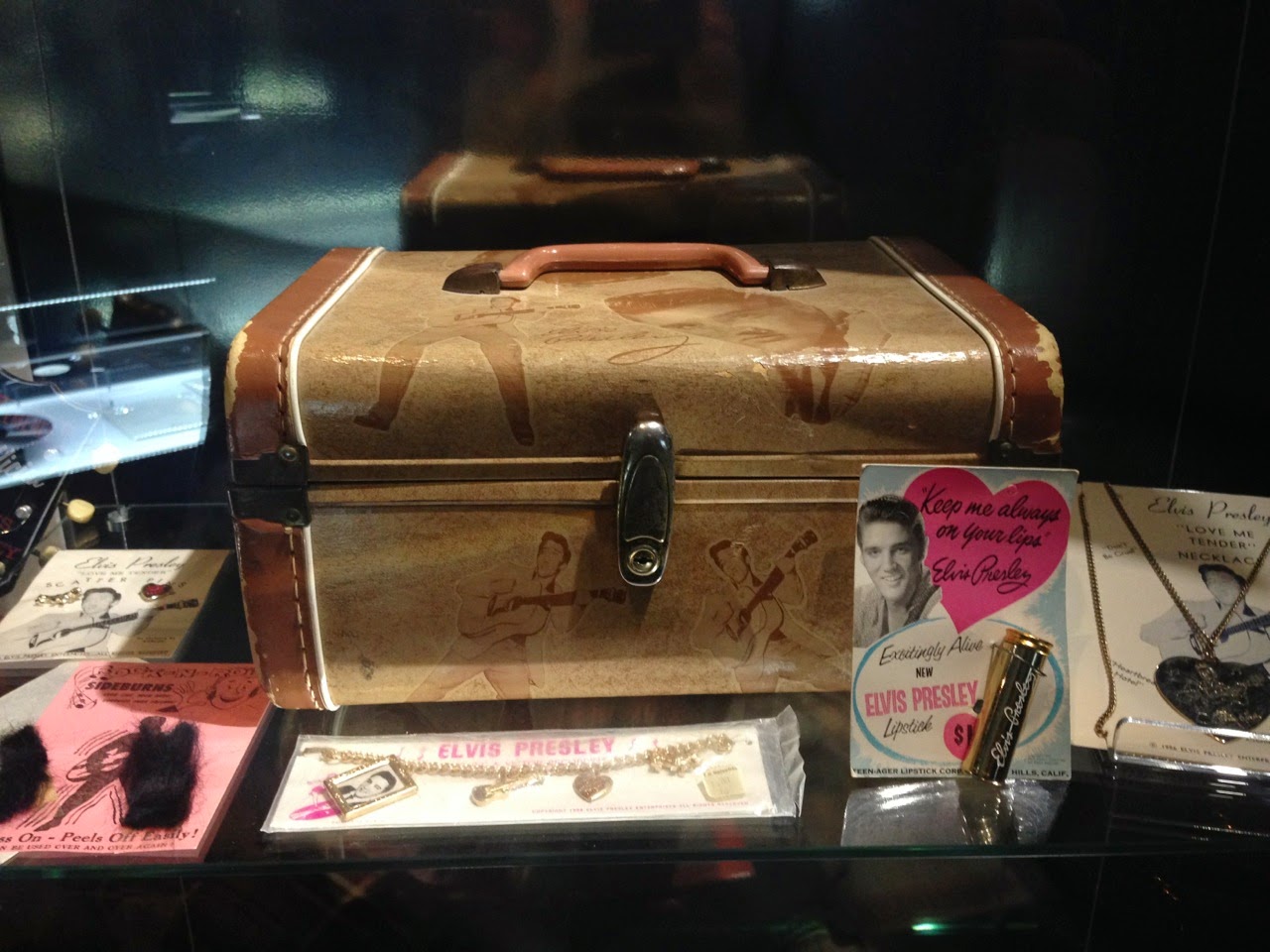 I guess what I am getting at is that Elvis is ostensibly tacky. But this tackiness was completely original. Reviewers from the big newspapers who have criticised the O2 exhibition for displaying ‘a squad of bejewelled and tasselled white jumpsuits’ are just not getting the nuanced complexities that are so much part of the Elvis story. The stock idea is that after Elvis returned from his time in the army he sold out and that his subsequent music and the associated imagery are worthless. No. No. No. The journalists that write this type of stuff are just showing the prejudices of their age. Elvis’s career can of course be divided into many phases (as they have tried to do in the O2 exhibition) and each of these has its own rewards. My own introduction to Elvis was through the reshowing of his films on TV every morning in the summer holidays. Far from highbrow masterpieces these films have their own kitsch brilliance and exemplify many of the contradictory and prophetic aspects of ‘Elvis’. Elvis was a man who had to come to terms with being a brand in an era when the dirty business of fully blown capitalism was still in its infancy. In his 33 films you can see a journey from idealism to dissolution to reconciliation. He started out wanting to be Brando, hit upon an easy light weight formula he eventually hated and as soon as he got out of his stifling contract he recorded the ‘real’ in a live TV special and two very good documentaries.

But back to those jumpsuits – they look amazing. If anything I would have liked to see more (take the journey to Graceland and you will be astounded – Elvis it seemed kept absolutely everything, as if he was aware of the importance of what he was doing). Elvis collaborated with designer Bill Belew, suggesting motifs and ideas that would costume the persona, that in order to survive, he had to maintain and believe in. So the suits, which are loosely inspired by superhero outfits, feature tigers, eagles, lions and more sparkle than a constellation. Eventually Elvis needed more than the suits, the diamond encrusted jewellery, a gold telephone and multiple huge cars (all displayed at the O2) and he began to rely more and more on drugs to maintain his ego. He seems to have believed that this medication was only ever to enhance his ordinary mortal functions rather than a narcotic dependence. His drug taking was never recreational it was a necessary part of maintaining ‘Elvis’. 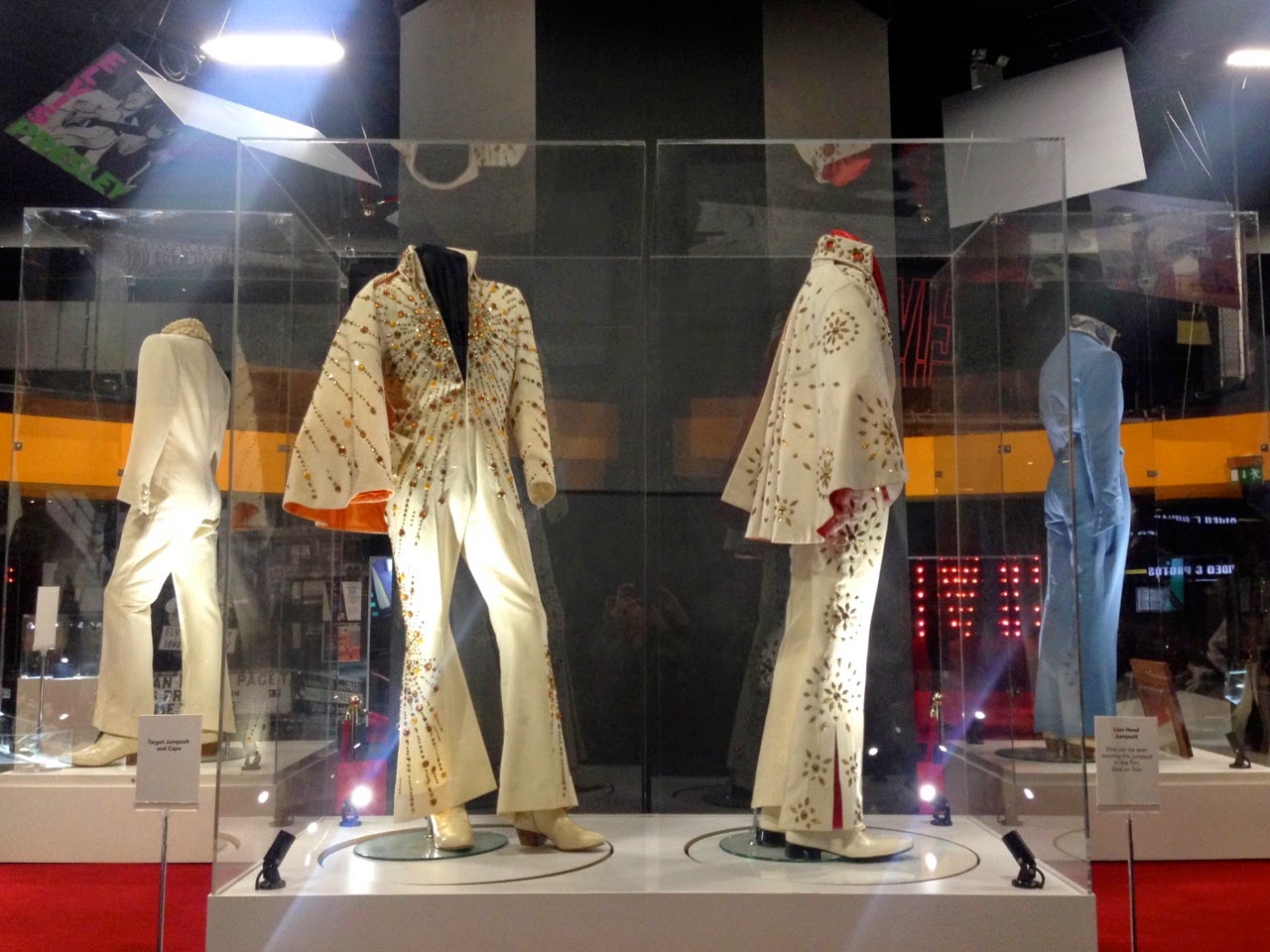 Another criticism that reviewers have thrown at the exhibition is that it does not tackle Elvis’s struggles and dark times. But what official biography ever does? It is not the place of this exhibition to document the bottles of pills, and of course, there were never any official prescriptions because a doctor on the payroll would supply whatever the King needed. Elvis believed in the magic of medicine and was the proud owner owner of a medical encyclopaedia of pills and their effects which he would consult to prescribe to his friends from (now this I would like to see in the exhibition). If you want to know more read a biography, and may I suggest Peter Guralnick's comprehensive Last Train to Memphis and Careless Love.

There is always a problem when exhibiting lots of small items. The minimal visual appeal of things such as letters, tax returns and small items of clothing is tackled at the O2 by filling the exhibition space with blown up images of screaming fans and pages from Elvis’s scrapbook. Although I recognise the thought process behind this, it ends up making the space look rather like a corporate trade show. It would have been braver to go for a starker, more reverential museum style layout or alternatively, something which evokes the overblown domestic atmosphere of Graceland. As for music, is an exhibition ever a good place to listen to music? There are of course snippets playing but really Elvis music needs to be listened to away from the blandness of the O2. 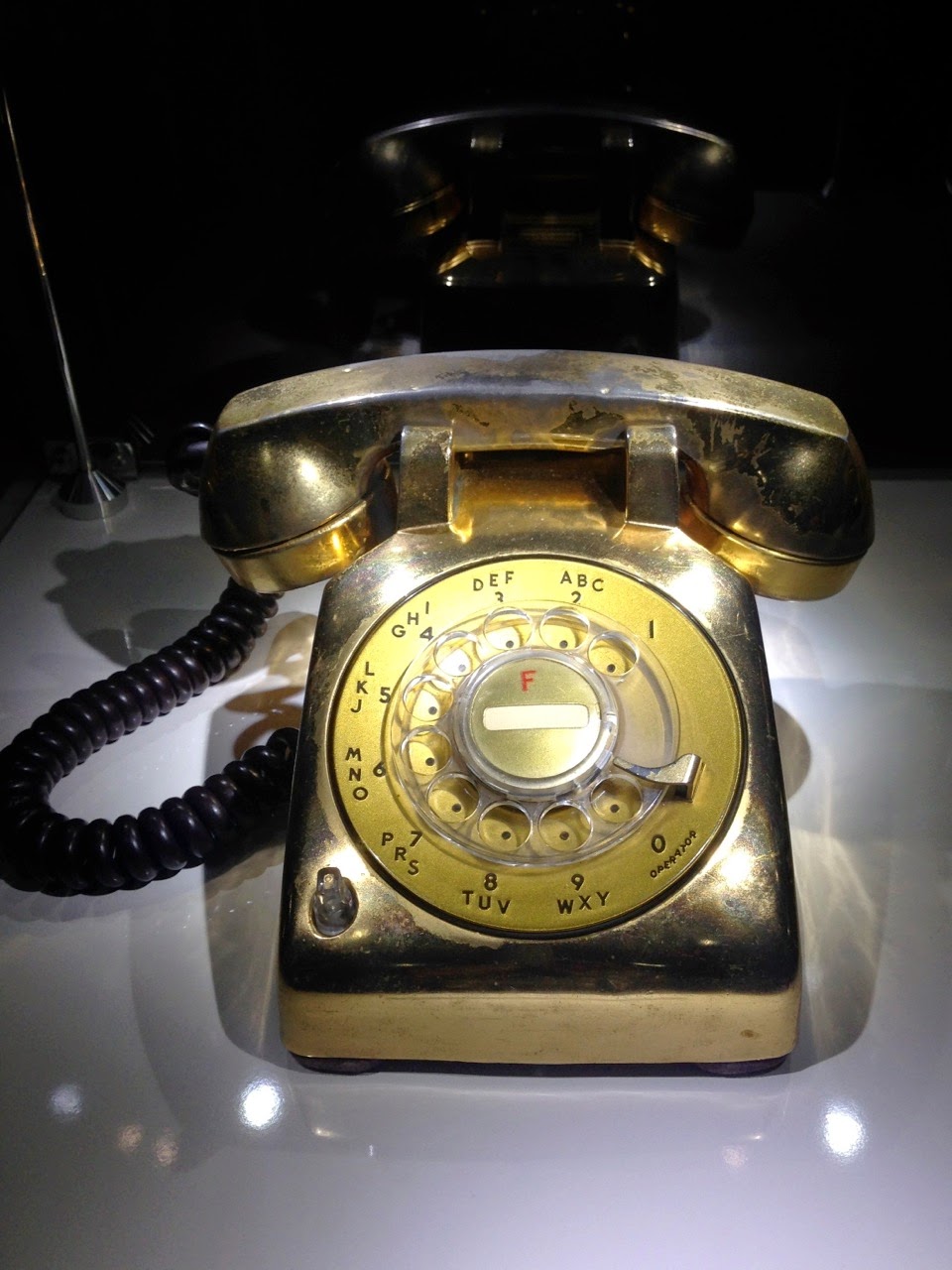 Elvis at the O2 may not convert people to the church of Elvis but if you are familiar with the myth or have any interest in Americana it is a must. It should be seen as a fantastic accompaniment to reading an Elvis biography or listening to his music. It doesn’t give you the full Memphis experience, how could it, but it is has some amazing items on display and there is of course a merchandise filled gift shop.