Firstly I am ashamed to say I hadn’t really heard of Heilmann before this exhibition. I was bored and depressed from my visit to Hauser and Wirths other enormous Saville Row gallery, showing dull, formulaic paintings by not so YBA Michael Raedecker, so uninteresting, that the PV needed a huge brass band to distract from the images!

Walking into Heilmann’s show was a complete contrast and at first not a nice one, its full, there must be over a hundred painting, chairs and ceramic panels. Bright colours, odd angular shapes and busy patterns left me momentarily stunned. And slowly as I ventured further into the space, taking a seat to rest from the colourful assault, a smile crept onto my face. The exhibition is euphoric, I don’t think I would have looked twice at many of the pieces individually, yet as a whole they have an exciting energy. The exhibition's very obvious title is perfect, one is led through a completely mad series of landscapes, the natural free brushwork of ‘waves’, the man-made, severe and solid ‘roads’ and the insane primary and neon ‘visions’. 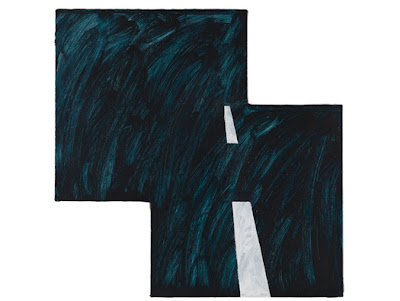 Usually such a negative word, quirky, here seems to work, Tetris like angular canvases jostle with blobby ceramic cartouches. Everything is very handmade. Heilmann is someone whose joy and excitement by making is obvious, and infectious. It makes you want to grab a brush and go wild. An almost art as therapy approach, again usually so negative, seems to work, visions of a mad artist who cannot eat, sleep or stop – a crazed need to create. 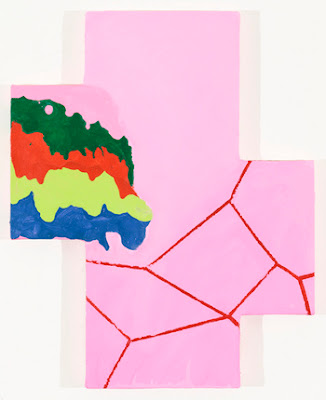 Walking around the exhibition is a full on experience, and I’m sure not to everyone’s taste, but getting over the initial onslaught leads one into a rewarding flow, as the eye is drawn to curious little patterns, odd materials and a thrilling storyline, emerging from the noise. An almost filmic backdrop of Americana starts to emerge, the long endless highways, untamed nature and a hippyish experimentation. An Easy Rider of small canvases jostling for attention.

I am so excited to have discovered Heilmann (embarrassed it took so long) and strongly advise a trip to the show on until the 5 April. And don’t be put off by initial reactions, have a sit down in one of her fabulously garish chairs- and wheel yourself around her world. You wont regret it! 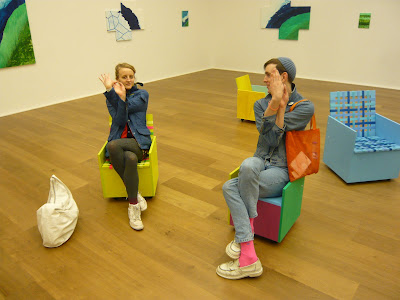 Interacting with the Heilmann

Zines are now firmly established as a counter-cultural phenomenon. Each new generation of zinesters takes them lovingly to their self-penned sketched and scribed hearts. The lure and élan of DIY documentation shows no signs of abating. Zinedom continues to re-create itself like a Deluzian rhizome 'ceaselessly established connections between semiotic chains, organizations of power, and circumstances relative to the arts, sciences, and social struggles.' (A Thousand Plateaus – Deleuze and Guattari)

Thus it was that one sunny February Saturday I truddled along to Tooting Bec with my over heavy trolley filled with Garagelands, Artys (old and new), Corina Spencer’s little Collectors and a jingle jangle assortment of badges. Transition Editions on tour ready to take my assigned place on the shared Deleuzian indy-kid table

The (pop up) Construction Gallery on Upper Tooting Road is nestled between a nail bar and a pub. Slap bang in the middle of a busy shopping street with a Polish delicatessen opposite and numerous curry houses and Indian sweet shops near by.


Setting up begins… it is always thus, you realise you have too much stock and there is not enough space on the table but then with zine fairs you never know how its going to go. I am next to illustrator and printer Sally Hancox who is making a killing selling her little hand drawn and printed tags of animals with diseases (50p each). I  bought 'deer with dyslexia' but another in the series included 'the hyena with hearing impairment' and so on. Next to us, Nane Kawahara also has cards with various cute animals in crisis, she explains the whole life history of the printed cats on her canvas bag (adopted etc). I get my money out and buy a couple of her Christmas cards (spending all my float before I have even made a sale!) Arty always gets a good response, here in Tooting they are more interested in the old photocopied and stapled variety to our new Karen Kilimnik themed issue. I get interviewed by Adrian from Monocol Radio who refers to   “Arty” as “ one of the great zine successes”

Peter Whiddon a graphics design student from Winchester gives us all questionnaires to fill out about printing and zineing in general. He is doing a research paper on the death of old technologies and talks very knowledgeably about various printing techniques and is very enthusiastic about what he refers to as the 'self-publishing community'. There is much talk about the proliferation of DIY books and magazines in the era of the internet, all these zinesters are fully new media savvy, this is not some reactionary Luddite arena. More a counter-intuitive rebelliousness, a reaction against the supposed modernity of the all encompassing  virtual and a return to the book or magazine as object – more of a conceptual response.

It is not all cuteness – kittens and girls with guitars – elsewhere Hamja Ahsan who has organised the event is publicising the Free Talha Ahsan Campaign. Ahsan a British citizen and poet was arrested in 2006 and is facing extradition to America due to an alleged involvement with a series of websites one of which happened to be located on a server in America. Hamja is also the co-director and curator of Other Asias a transnational artists and writers collective. He wrote a strikingly polemic piece for the Migration issue of Garageland and I am meeting him for the first time. Struggling with a cold and having the harassed look of an organiser I mange to get a few words with him telling him I really liked his piece in Garageland, 'I’m not that angry any more' he says and then ruefully adds 'But maybe I should be'.


I also meet Misha Malsev a Siberian film–maker and organiser who is here with his Partisan zine.  I am fascinated to hear about the culture of Siberia, we talk about Siberian Hip Hop and Ska, gay clubs and fashion. 'Great title' I say and we both talk about how the word Partisan has taken on negative connotations but how 'back in the day' when it referred to resistance fighters in the forest it was a revolutionary and glorious thing. Of course I find myself buying one of his Shamanic singers CDs. 'It’s the real deal you know' he says and I do, reminding him that Rasputin came from Siberia. I have of course yet to listen to it.

This is just a small sample of the many other activities and zines that were part of the fist Tooting Zine fair – I never got a chance to see the zine making workshop or watch the films of even see most of the other publications… it is always thus. The idea of a zine community is a bit of a misconception.  The variety of aims and styles is so overwhelming but there is no denying the continuing appeal of this kind of agit prop rebellious enclave of otherness.

For yet another Zine Land, Transition Editions will be at Publish and Be Damned at the ICA on 17 March 2012  between 12 and 8pm