Archie Franks is drawn in by the work of Ragnar Kjartansson at the Barbican, London.

After 40 minutes of watching band The National perform the same song over and over (Sorrow), I was engulfed in a strange mix of emotions. On the one hand the idea of the work is so direct as to be almost idiotic; a fashionable band perform the same song on repeat in front of an audience for six hours, but Kjartansson uncovers something else within this act, something quite strange and genuinely moving.

Feeling sad on my own I, along with many millions of others, have played the same song on repeat for hours on end, to wallow in sorrow as it were. So to turn this clichéd act of melancholy indulgence into an artwork is at once an obvious but also intriguing concept. I guess I was able to watch it for so long partially because I like the song, but the film of the performance and the way the band go about it are totally engrossing. One moment, in which the camera focuses on the drummer massaging his arms between his playing, brings home the difficult physical act of the performance, sorrow and melancholia enacted as a gruelling, relentless endurance test.
Read more »

In early September 2016 Unlimited Festival returned to London's Southbank Centre as a celebration and continuation of the artistic vision and originality of disabled artists. As part one of Garageland Blog's coverage Joe Turnbull reviews Cameron Morgan's paintings of classic television shows at Southbank Centre.

Let’s face it, we all have our guilty TV pleasures. Is there anything more comforting than curling up on the sofa with an old favourite? Like music, our favourite TV programmes from the past are signifiers of seminal periods in our lives. But that’s rarely acknowledged in the same way. TV is somehow seen as ephemeral and ‘low art’ in terms of culture.
Read more »

David’s Days in the Hills

Michael Ajerman crashes the Hockney PV at the Royal Academy.

Hollywood and Hollywood not
We are so lively on the spot
Never sold out always in stock
Are you deaf or does this rock?
Red Hot Chili Peppers, Sikamikanico 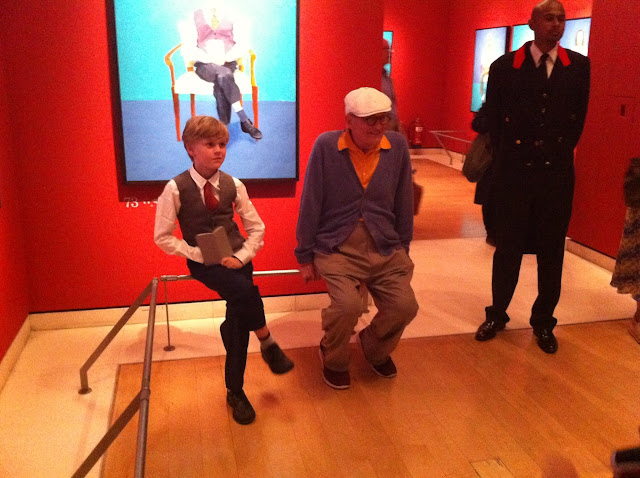