A Beautiful World of Googly Eyes and Jelly Fish

A visit to Tate Modern finds Cathy Lomax pondering the existence of an underwater black Atlantis. This is her review of Ellen Gallagher's AxME, a show about a world of beautiful liberation.


Ellen Gallagher employs multiple art-making personalities in order to convey the concerns that interest her. In AxME (say it out loud to get it) her solo show at Tate Modern, she paints, prints, collages, draws, sculpts, films and installs in order to tell us about the strange and cruel stereotyping of being other (and more particularly black) and her fantasy about escaping this and becoming immersed in a world of beautiful liberation.
Read more »

Alex Michon visits the grand confines of Chelsea College's banqueting hall, the meeting place of the Suppose a Salon /Symposium, and learns of a recipe that she's eager to try out.

Where do stoner culture, lesbian sex, food, burlesque nipple tassels and high art modernism converge? These items were all on the agenda at the Suppose A Salon /Symposium which was held in conjunction with the Suppose An Eyes exhibition currently at Transition Gallery.

After a circuit of Heather Phillipson's corporeal Baltic Centre exhibition, Garageland reviewer Iris Priest leaves the art behind for a guided tour of Newcastle's backstreets. 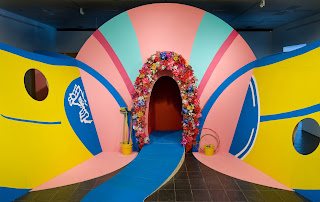 I am sat with three strangers, all of us deeply inclined on pillows. My spot is still warm from the previous occupant and their lingering body heat stirs a simultaneity of comfort and unease in me.

This is an apt beginning to Heather Phillipson’s exhibition at the Baltic centre Yes, surprising is existence in the post-vegetal cosmorama a show that oscillates between states of bodily and intellectual uncertainty, playfully testing the boundaries of self and other and occasionally obsessing over issues of personal hygiene and love.

An Ascent of the Serpentine Gallery Pavilion

Today we follow Marianna Michael on a precarious clamber up the 2013 Serpentine Gallery Pavilion designed by Sou Fujimoto.


Walking through the green fields of Kensington Gardens my eye is caught by the distant emergence of a white scaffold. Squinting through the blinding sun it is just possible to make out people trespassing on the construction site. On coming closer, however, the structure represents something entirely different. It is a building, a work by architect Sou Fujimoto, and an irresistibly delicate piece of architectural design.
Read more »

It was the drone of a police helicopter overhead, not the Star of Bethlehem, that led me to Frith Street Gallery 17:00 BST on the 11th June 2013. Paying homage to British sculptor and installation artist Cornelia Parker was, befittingly, met with breaking news of local criminal activity: 'Riot Police Storm Soho G8 Protest Squat'.


Where Parker was exhibiting – amongst other works – Prison Wall Abstract (A Man Escaped) 2012-13 in Frith Street, a stone’s throw away in Beak Street, protesters were staging a ‘Carnival Against Capitalism’. It seemed that in Soho the heretofore unnoticed was, quite literally, being rallied into high relief. For Cornelia Parker’s Pavement Cracks (City of London) 2012-13 are not forgotten underfoot, but are rather elevated to ankle level. We walk precariously amongst the fractures.
Read more »