Cheung’s new paintings at Edel Assanti feature large romantic landscapes recalling that tradition of painting which included John Martin and Caspar David Friedrich. Primarily referencing the palette of photography, Cheung casts a technicolour glow over the landscapes populated with rock features, swampy valleys and windswept trees, and an epicentre of unnaturally brightened movement around the bull and its rider. The language of graphic enhancement seems appropriate here, as it is through the marriage of painterly knowledge and computer editing of digital imagery that Cheung’s unique vision is developed.

The machismo of the bull-riders set within these sparsely populated mountainous worlds, appears like an analogy to the artist’s own command of painterly material in the context of its intrinsically fluid and visceral make-up, an alchemical substance that transforms tracings of the action of the painter’s hand to solid illusory surface of an image. Slugs of colour are applied as seemingly soft, unsolid ‘fresh’ paint, implying movement of the central forms relative to their more static surrounds. Sunspots with their spray-flecked fringes inhabit defined sky-areas juxtaposed against inky silhouetted landforms. In Supercell, swirling lines describe the watery ground, picked out through sparing painterly intervention. Attention is drawn to the force of the bull’s movement, which appears to cause rainbowed worms of paint to fly into the depth of field of the painting’s surface. Cheung associates the movement of his subjects with the action of his technique, thereby linking the challenge of his materials with the imagined struggles of the paintings’ protagonists, within a setting of materially evocative surrounds.

The use of stock-listings newspaper sheets, previously exploited solely as tonal backdrop and implied conceptual comment, has now confirmed its position in Cheung’s lexicon of materials. Burnt for pigment, it now also contributes a craggy charcoal relief to areas of the paintings’ surfaces. Strata of papier mache pages made into ambiguously crafted objects, become reconstituted into a seemingly aged and wood-like material. Collaged onto the paintings’ surfaces these driftwood and stalactite-like forms maintain a separate quality, framing views into the landscapes depicted beyond them, more separate even than the craggy relief of the charcoal-material formed from the burnt paper. Unlike the previous seamlessness of their use as tonal flattened ground, insidiously incorporated into the beautiful material illusion of his painterly surfaces - the same building block is now transformed into more consciously applied constructions. For me this demonstrates a new sophistication in the use of the stock-listing sheets, building on their long-standing status within his practice, and re-confirmed as a truly integral language to Cheung’s work.

Penlee House, which generally shows the more traditional paintings of the Newlyn School, is currently hosting Sven Berlin, Out of the Shadows. Berlin (1911-1999) is best know as the author of The Dark Monarch, a kind of enhanced reality novel that landed him in deep waters with the mid century St Ives art community. 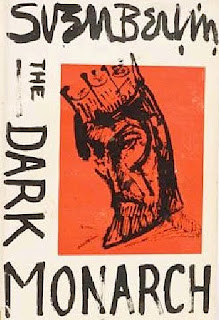 The Dark Monarch went on to provide the name for probably the best show that Tate St Ives has ever staged, featuring work by historic and contemporary artists (including Berlin) about magic and the occult. Berlin, a romantic and resolute realist, was side-lined when he did not conform to Ben Nicholson’s new St Ives modernism and he left the community with his new wife to live with Gypsies in the New Forest. Berlin was a polymath – music hall dancer, author, painter, critic and free spirit. The Penlee House exhibition, which is the largest ever of his work, mainly focuses on his New Forest era paintings, which although not large, dominate the space with their straight from the tube primary colours, which furiously clash in a kaleidoscope of bad taste.

There is no subtlety here and the work is initially shockingly horrible to eyes more used to the sensitive subtleties of contemporary painting. Silver-Faced St. Sara (1956), depicts the patron saint of the Romany people and has much in common with Tretchikoff’s wildly popular kitsch images of exotic ladies. Another work, Ken Lee (1964), a portrait of the son of one of Berlin’s Gypsy friends, is painted on a dark blue ground, which is overlaid with wide brush strokes of bright red and yellow.

Other work includes numerous self portraits and a whole series of what could be termed magic realist scenes of woodland animals. Ultimately the bad taste is liberating – Berlin cared nothing for the art world and his exuberant originality provides a good example to many artists today who are too worried about conforming to current ideas around good taste.

The Exchange’s English eccentric is Bruce Lacey (born 1927) whose solo-show The Bruce Lacey Experience curated by artist Jeremy Deller and art historian Professor David Alan Mellor has just transferred from Camden Arts Centre. Like Berlin, Lacey started off with an interest in the music hall and this quirkily curated show has a selection of memorabilia including costumes and toys from his childhood as well as a selection of paintings from his time at Hornsea School of Art and the RCA (1948-54) which have the familiar British realist look you would expect - drab coloured Freud / kitchen sink school crossed with a pinch of Graham Sutherland style semi abstraction.

While at the RCA Lacey started his performance and filmmaking career, which drew on the music hall and is what he is now best known for. The Exchange is dominated by Lacey’s constructions - Heath Robinson style machines and animatronic figures constructed from household objects and bits of rubbish. These whirring machines provide the soundtrack to the space, which also includes videos of Lacey’s ritualistic performances at various sites around the Penwith area of Cornwall. On 17 November there is a chance to view the BFI’s recent release of Lacey related work The Lacey Rituals, followed by a guided tour of the exhibition by Jeremy Deller.

The Bruce Lacey Experience has Jeremy Deller’s now familiar loving but ever so slightly patronising ‘look at this crazy art I have uncovered’ air. It includes touches such as hand written labels (by Lacey himself?) and has been accompanied by the reams of national publicity that a Deller project attracts (including a listing in the previews section of the current Film issue of Garageland). Sven Berlin Out of the Shadows is a more earnest small gallery exhibition with less knowing accompanying literature and a traditional busy hang. These minor points aside they are together a breath of fresh air – the rediscovering of a British heritage of originals and non-conformists who could hopefully provide new inspiration for British art. Bruce Lacey who had a surrealist fancy dress party for his 80th birthday says ‘the most important thing to remember is NEVER TO LOSE THE CHILD WITHIN YOU!’ Good advice for us all.