Months of Zoom have twisted Toby Upson’s usually joyful outlook on life, with the result that for his review of Ugo Rondinone’s new show at Sadie Coles, he has (in his own words), ‘been a bitch’.

'Eeyore: not so much a frivolous neigh, rather a dreary response to something lacking any sense of profundity.' This is perhaps the first line and a bit of art-writtery-wank that I have spewed (to a public) in 2021. So let's step back - perhaps a bit too far - and begin from somewhere a bit more recumbent.

April 2021. I have been dreaming, for the first time in a long time. About what I cannot remember. Nothing good - nothing erotic - all dull, blasé, romantic. You know the stuff: meta-fluff. But still, I have been dreaming. Perhaps the lack of visual stimulation - or ability to practice some kind of ‘haptic looking’ to use Laura U Marks’ term - over the last few months has forced me to create for myself some sort of transcendent experience, like the kind I would normally find in a gallery. (1)  Now upright and in the (art)world, I am flying around town, perhaps naïvely falling back into a corollary routine foregrounding the accumulation of cultural capital. (Yes, a routine that I am continuing with this very text...) 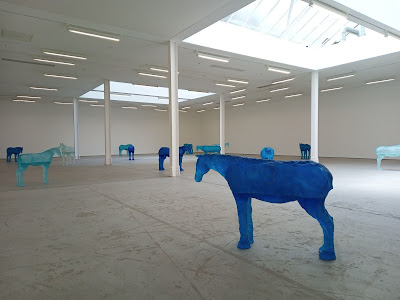 There is something quite poetic about seeing blue glass horses following the coronavirus induced hibernation. At a time when aesthetic experiences were primarily defined and disseminated by a tiresome blue light of a computer screen, this gentle re-embodiment of art back in a gallery space feels… nice.  The 15 individual blue glass horses that comprise Ugo Rondinone’s herd (in one half of his split gallery presentation across two of Sadie Coles’ London spaces) appear just that... nice. The formal qualities of these knee-high painterly ponies reminds me of the smoothed faces of Jelly Babies, or maybe to be more adult, dulled seaglass aged through exposure in the tough old ocean. Either way, the cumulative effect of these forms seems to emphasise the space of the gallery. Have you ever looked up in Sadie Coles (Kingly Street)? Indeed, have you ever stared intently at Maynards Bassetts’ packaging?

Taking their titles from various seas from around the world, the play-doh-uous ponies, we are told in the press release, ‘embody ideas of space, time and nature,’ themes recurring throughout Rondinone's practice. These figurative pieces seem to depart from what I know of Rondinone's oeuvre - the fluorescent towers of pebble-like shapes as seen in his series of Mountain sculptures - but ultimately retain the same sense of placidity. That is, a calm romanticism, or simple sugar induced high to be seen. The allure of the natural world, and in particular its transcendental possibilities, seems to be lost or rather overly foreclosed here by the way spiritual metaphor is squeezed into the forms of each sculpture. Literally embodying the rise and fall of the sun/moon on a horizon line - those cliché magical hours - each horse  feels somewhat contrived - or to pun, blue. For me personally underworked theory is never sexy. 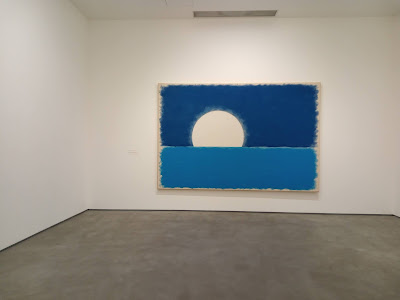 The ethereality referenced in the landscapes confined within the bodies of Rondinone's horses is perhaps better seen, or at least sketched out, in the series of minimal watercolour works that seem to connect the two of gallery spaces. Minimal is the operative word here, simple circular shapes and a crisp horizontal line are used to picture something of an art deco-esque (or childlike) sun rise/set. Debased of complex narrative subject matter, the surfaces of these predominantly small works (achtundzwanzigsterjunizweitausendundzwanzig, 2020 being an exception) recall the painterly exteriors of Rondinone's ponies, creating a nice link between the two and three dimensional works. (You can imagine - someone - buying one of each; you can never have just one Jelly Baby after all.)

Rather than ‘painterly ponies’ grazing the gallery floor, in Sadie Coles’ Davies Street space, monumental amorphic canvases fill the walls of the lower gallery-come-chamber. Recalling Rondinone's Mountain sculptures, that I am far more familiar with (albeit squashed), my attention here is drawn to the surfaces of these seemingly precarious towers. Quick slithers of thin oil on deformed canvas give these paintings a sense of speed as well as texture. It is as if a young child - high on those very same Jelly Babies - has broken into a paint store and sloshed around using anything - hand, foot, brush - to make manifest the energy now unbound through sugary rapture. Far from being wholly free however, the raw marks that give a über-fast slickness to the surfaces of these paintings are contained, enclosed by the deformed stretchers of each canvass. It appears the artist has paid attention, hemming in his gestural ablutions, keeping the overall tone of the works within a canonical lineage more transcendental colour field than macho expressionism. 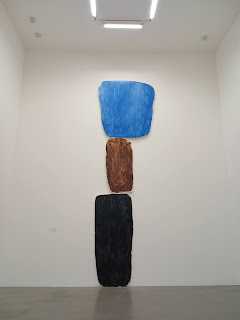 As with Rondinone's 15 sculptural works these large paintings seem so self-referential that they emphasise the space of the gallery, the very confines the artist’s work operates within here. (2) Rather than becoming ‘prisms that alter the space around them’, as the press release suggests, I feel that the works accentuate the enclosing packaging of the gallery space, offering perhaps an apt reference to the semi-re-opened (and highly capitalist) times I find myself in. It’s nice to be out about again, but like so much of the meta-fluff that I have been dreaming about over the last year or so, I doubt I will be remembering this exhibition for too long.

(1) 'Haptic looking tends to move over the surface of its object rather than to plunge into illusionistic depth, not to distinguish from so much as to discern texture. It's more included to move than to focus, more inclined to graze than gaze.' Laura U Marks, Skin of the Film, 162

(2) Rondinone’s work has a very different quality outside of the gallery - I feel this is important to note.