Rosebud Lips and Shingled Hair: The Art of Madge Gill

Cathy Lomax visits the William Morris Gallery to see Myrninerest, an exhibition of the work of the visionary local artist Madge Gill.

Born in East London in 1882, Madge Gill had a life filled with tragedy. These experiences, which we are told inspired her artwork, are, in common with other outsider artists, the starting point in any conversation about Gill. Set up in advance with this biographical knowledge I am ashamed to say that it is precisely this that hooked me and pulled me to Walthamstow to see this recent exhibition. 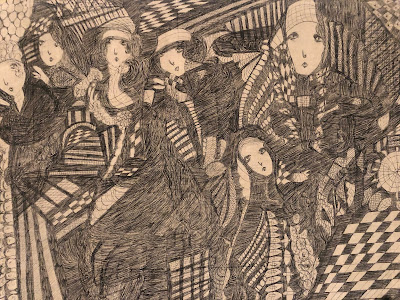 Gill’s hardships included being sent to an orphanage, transportation to Canada as part of a child-labour scheme, the death of two children and a long-standing mental illness. It was at the age of 38 after treatment for an undiagnosed psychiatric condition that she began to draw, an activity that she claimed was encouraged by a spirit guide called Myrninerest, whom she came to embody. It is said that Gill drew, played piano, wrote in a strange language and crocheted whilst in a trance state (although the Society for Psychical Research in London judged the drawings to be ‘more of an inspirational than of an automatic kind’). Whatever the status of her artworks Gill went on to be a medium in her Upton Park neighbourhood and is is said to have organised séances at her home, drawing up horoscopes and offering spontaneous prophecies.

Gill we are told received no formal art training. The repetitive blocks of pattern and line that fill the paper and calico she worked on are familiar to anyone who has a passing knowledge of outsider art. You can imagine the hours spent creating these impressively detailed works, which if cut down into smaller pieces could resemble the kind of images we might have dreamily made ourselves in our school exercise books.

In the darkened downstairs gallery the work is over-hung to emphasise its obsessive nature – the wall covered by rhythmically inked swirls and cross hatching; a controlled chaos of movement. The frenetic disquiet is punctuated by little pools of light, which reveal themselves as faces, or is it just one face repeated over and over again? This woman’s face is simplified to exemplify a type, a flapper with rosebud lips, shingled hair, smoky eyes and every now and then a headband. This is an idealised image of how someone might want to look in the early part of the 20th century – a schematic that went on to become a blueprint for the Biba face of the 1970s. The room is dominated by a huge work called Crucifixion of the Soul, which at 147 x 1061 cm fills a complete wall. It’s an arresting room that visualises the disquiet we imagine being in the mind of this artist. The rippling lines are thought-waves; the face pools are dreamy imaginings of a fantasy self. 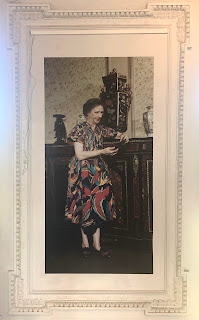 Gill exerts her presence over the gallery quite literally in the form of a larger-than-life photograph above the staircase. She is smartly dressed in a swirly colourful print and looks down at something she is holding in her hands, decidedly uninterested in meeting our gaze. Upstairs are a series of smaller postcard sized works – some featuring her figurative line drawn women and some a more abstract design. On a nearby screen Peter Blake talks about her work. 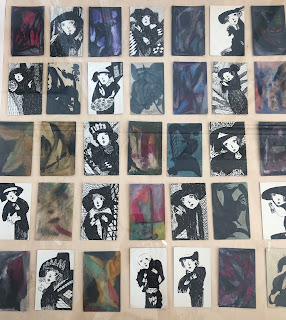 Viewing outsider art is in some ways like reading misery porn. A biographical portal into a life that we hope we will never have to come anywhere near experiencing. Beyond this we have a longing and admiration for its purity, it is art as necessity, art as a lived fantasy. This haunting exhibition showcases Gill’s outsiderness well but it left me wanting to see more of her art. I would like to see her work hung in relation to other artists in our national collection (Tate Britain please) so it can be admired for its artistic merits rather than seeing her as a kind of carnival, sideshow oddity.