Cathy Lomax visits two new shows at the Hayward Gallery which are situated at opposite ends of a fairy tale thread.

Matthew Barney’s Redoubt, a film and a series of sculptures and copper wall pieces, is dark with a luxuriously sinister veneer. In the dimly lit downstairs gallery Cosmic Hunt, a huge steel sculpture cast from a charred and debarked tree with added wolf pelt, sits on a tripod. It is a gun/phallus cocked and ready to fire. 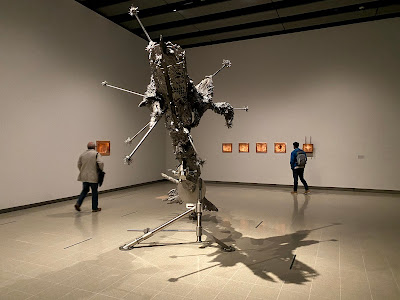 This is framed by a series of highly polished copper plates, etched with forest scenes, shimmering under their spotlights like vulgar symbols of ostentatious wealth. Above on the mezzanine is the centrepiece – a huge screen showing Barney’s film in which camo-clad dancing hunters chase down and kill a wolf in the snowy mountain wilderness of Idaho, while an engraver in his studio spins an artist’s (played by Barney) observations into copper etchings. Wolves, forests and mythology evokes The Company of Wolves (1984) and continuing the British filmic fairy tale theme there is a visual thread that connects the dancing engraver with Robert Helpmann’s shoemaker from the sublime The Red Shoes (1948). But this is the macho American wilderness and not the claustrophobic female world of dark European fantasy. The wolves here are not hairy on the inside, instead they are hunted and skinned and disempowered.

Barney’s exposition does initially have atmosphere, but this is melted away by its over-production, the digital hyper-real clarity of the film and the impossibly shiny copper plates, quash the dark mood, infiltrating it with corporate blandness as stylistic refinement segues into empty detachment.

The production budget must have been colossal, and this goes someway to explain the upstairs section of the show where the copper and bronze wall hangings and sculptures are brightly lit as if in a showroom (or supermarket). Damian Hirst’s 2017 Venice Biennial folly Treasures from the Wreck of The Unbelievable came to mind as I descended the staircase to visit the second exhibition at the gallery. 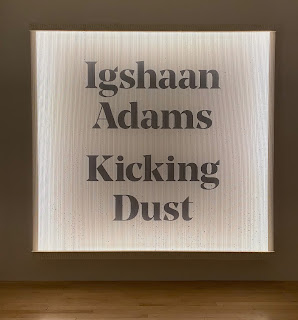 Although Igshann Adams’ Kicking Dust (the second show at The Hayward), has its own fairy tale rationale, its soft diffusion of beaded tapestries and clouds of delicately twisted wire works could not be more different from the dark machismo of Barney’s Redoubt. Kicking Dust is described as a single installation made up of a number of components. The inspiration for these works lie in Adams’ South African heritage as reflected by their Afrikaans titles. Particularly poetic are the pathways or ‘desire lines’ that allow us to walk amongst the weavings on the gallery floor which reflect Adams’ field research in the suburbs of Cape Town, and the wire clouds, which are inspired by the dust kicked up in a dance performed in the Northern Cape and infuse the gallery with a soft haziness.

Emerging from the delicate pastel-toned world of Kicking Dust involves a short immersion in the harshness of Redoubt – two shows which really could not be more different in tone.

Older Post Home
Subscribe to: Post Comments (Atom)
Garageland is an arts and culture magazine published bi-annually by Transition, from its base in East London. This blog contains reviews, comment and extra curricular content that adds to the ideas published in the magazine.
Click here for more about us, our writers and our editors.