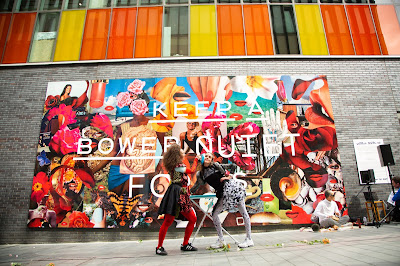 ‘The BBC were due to film the 11.30 performance, but they've been delayed’, says a  member of the Liverpool Biennial staff. There are other concerns. ‘We're just checking the sound levels’, says a voice nearby. No sooner have these words been uttered, than a sombre wash of pre-recorded strings signals the beginning. Two theatrically clad dancers stride in funereal slow motion towards a marked-off performance space...

Against a backdrop of uniform brick, Linder Sterling's Bower of Bliss mural blooms into life; its joyous crimsons, pinks and magentas foregrounded. KEEP A BOWER QUIET FOR US; a recent text overlay by Kajsa Ståhl cites Keats' Endymion: A Poetic Romance. In a busy weekend shopping thoroughfare, we're summoned to a place of sanctuary, with its abundant poetry of magic, enchantment & transformation.

This specially commissioned work forms part of The Stomach And The Port, the final chapter of the 2021 Liverpool Biennial, curated by Manuela Moscoso. In addition, a series of performances - or 'sense activations', as Sterling describes them, form part of a series of weekend events across the city, marking the Biennial's conclusion.

The term sense activation seems apt, reflecting the aspirations of an artist who sometimes appears frustrated by the limitations of the picture frame. In recent years, Sterling has sought to create collaborative pieces inhabiting three-dimensional space; itself part of a wider desire to explore realms of sense beyond the purely visual. With this in mind, a company of musicians, dancers, and costume designers is on hand, well versed at playing to their own and each other's strengths.

Her son Maxwell, composer, double bass player and sound designer, though not in attendance, is musically present via a pre-recorded soundtrack. His layered textures are enhanced by live stylings supplied by Kenichi Iwasa, seated on a carpet, surrounded by an array of unorthodox musical instruments. While most spectators lining the opposite wall could be described as 'art crowd', there's also a smattering of weekend shoppers more than happy to be drawn into the piece's more contemplative time frames. 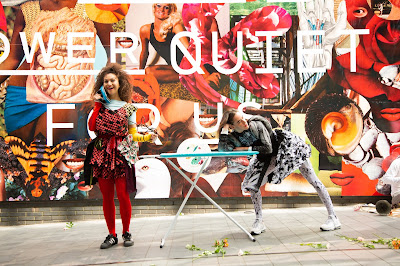 The stage props, an ironing board with iron, recall Sterling's late 70s oeuvre, with its confining domestic spaces. Clasping the iron to her ear like a telephone, Fitzpatrick's grin replicates not only grinning mouths within the mural, but those of an entire timeline; one of several repeat motifs evident within the Bower of Bliss (alongside whorls of rose petals, cosmetics, bird heads in profile, glamour models – all repurposed from their original sources and contexts). Yet, for this reviewer at least, there's never a feeling of jadedness when encountering these elements in Sterling's work.

At one point during the second performance, the man from the BBC finally arrives. He shoots a few frames before disappearing in search of the next story. Over at a nearby coffee chain they're counting customers in and out, but meanwhile, in a performance space now strewn with flowers, the two dancers join hands and take a bow...