A sublime chasm has opened in the heart of The City. A fantastical transgression, revealing not more Roman debris but the remnants of another ancient culture. Calling to mind the intricate narratives of Egyptian hieroglyphics, in this church otherwise allegorical stained glass has been replaced by colourless constellations; mapped by a poet-sorcerer. 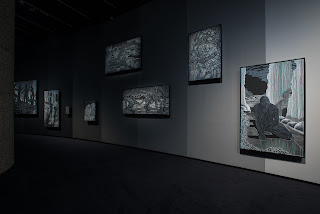 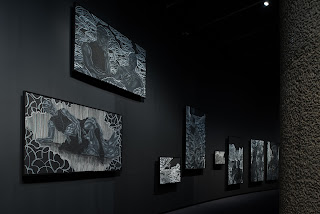 The reverberations from A Countervailing Theory, the first UK exhibition of Toyin Ojih Odutola’s work, is as mesmerising as it is metaphorical. Composed of 40 white on black drawings, hung relatively high in the Barbican’s dim The Curve space, and intoxicated by Peter Adjaye’s musical score Ceremonies Within, A Countervailing Theory charts, in monumental fragments, an ancient way of living, a speculative way of living, that challenges prefigurative history and the norms that dictate being today.

Like a vital pulse that sustains our being, storytelling is the life-stuff of Ojih Odutola’s practice. This exhibition tells the story of a prohibited coming together: Akank, a member of the Eshu female ruling class, meets Aldo, a Koba humanoid manufactured by their Eshu masters to carry out hard manual labour, and together they set in motion the breakdown of imperial imaginaries. The exhibition unfurls as a sequence of articulations, Ojih Odutola's monochromatic drawings whisper a narrative, from life to death and life anew, charting a relationship that pushes against the dictums that establish this imperial social body. 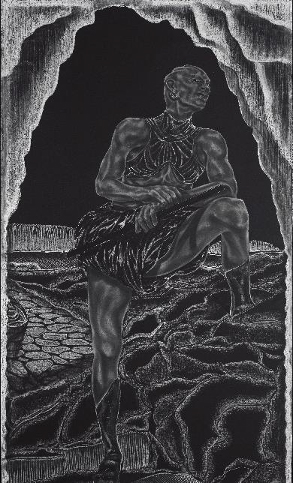 Moulded and aged by a hand who knows how to make empathy visually palpable, each of Ojih Odutola’s figures is crafted from dark waves in moonlight. Flicks of bright white pastel, smooth smudges of chalk, and deep crevices of charcoal, layer, like tissue, to form our semi-androgynous protagonist-beings. Ojih Odutola’s ruminations on the formal power of mark-making not only create bodies that ripple with singing flesh but conjure loose intelligible landscapes. The interplay between the intricacies of beings and the gestural suggestion of a heavily structured landscape alludes to the way in which social bodies are microverses constituted by the regimes in which they live. 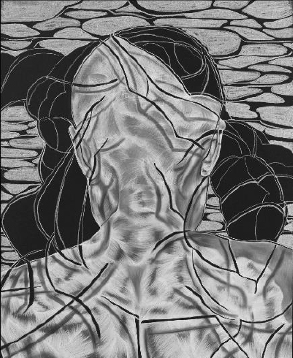 An eerie echo of historical coloniality, or a mindful whisper to our shadowy neo-colonial modernity, A Countervailing Theory speaks to us now, at a time when awareness of oppression and violence has been heightened both through physical distancing and the uproar following the murder of black bodies by police in the United States of America. Returning to the dichotomy between hyper(sur)real flesh and trope-like landscape, Ojih Odutola’s scenes, with their cut-off cropping, allow us to project into each image, in turn provoking metaphoric ruminations on the social body’s sensorial regime and its effect on being.

Parting ways with A Countervailing Theory, I am left aesthetically moved, left contemplating the possibilities for worlds anew, left wondering, how do our bodies move in waves at midnight? 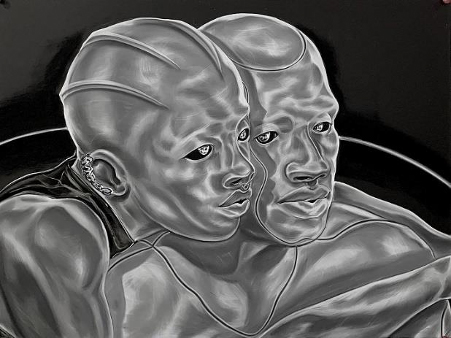 (free entry - but booking in advance is essential).